I don’t think my style will ever change! Photographer and chef Brooklyn Beckham wore a keyhole top that the Ballon d’Or himself might have considered. 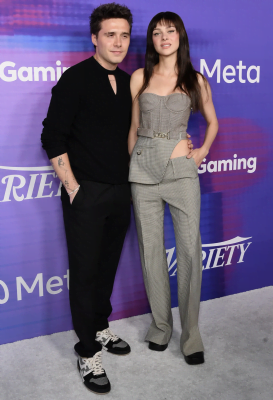 Brooklyn Beckham once said in an interview

Referring to that winning and proven formula of a simple white tee and perfect fit jeans that helped men in last fifty years. However, it seems that after the wedding with Nicola Peltz-Beckham, which took place last April. The photographer and chef of Instagram has abandoned the classics in favor of the more avant-garde proposals of menswear.

First Valentino’s unbuttoned, low-cut silk shirt and ivory tuxedo she wore at this year’s Met Gala, then the Dior-Birkenstocks combination and tails jacket she wore on her wedding day. Now, it looks like the 23-year-old is turning to a more hardcore Y2K style. On the red carpet of Variety’s “Power Of Young Hollywood” in Los Angeles, the Beckham eldest wore tailored trousers, low-top trainers and a cut-out top from Fendi’s AW22 collection that revealed collarbones and ribs.

It’s essentially anything that subverts a classic silhouette

While more traditional menswear might look at him in horror, Beckham isn’t the only one who dared to get naked recently. Harry Styles was photographed for the cover of Dazed magazine in November in a simple black tank top with a hole in the center. While singer Troye Sivan showed up at last year’s Met Gala in an Altu dress with cut-outs that hugged the waist. Eye to the supermodels of the 90s.

We are happy that Brooklyn Beckham is finally in an experimentation phase. After all, it’s about David Beckham’s son: a man well known for pushing gender boundaries nearly two decades ago (sarong moment will forever remain in the fashion hall of fame).