Only a few days left before the actual start of the Artemis 1 launch date . The one that after the historic Apollo will bring humans back to the moon.

This is an extended NASA, ESA project in which numerous Italian companies have also participated such as Leonardo and Thales Alenia Space (Thales-Leonardo). Which have built components of Orion’s ESM (European Service Module). And Argotec which is involved in the development of the small Italian satellite Argomoon.

The first step is called Artemis 1 and has just been placed on launch pad 39A towards the lunar orbit to test all technologies.

It is composed of the SLS carrier and the Orion spacecraft, will be an unmanned mission. But of fundamental importance for the subsequent passages that see Artemis 2 and Artemis 3. This mission in fact aims to demonstrate the reliability of the SLS (the orbital launch system). And systems of the Orion, including the service module, in preparation for flight, and to test the heat shield in a high-speed reentry.

Aremis 1 launch date, after passing the various tests, transferred to launch pad 39A in Cape Canaveral. So, the same pad also used by the historic Apollo missions and the Space Shuttle.

The gigantic rocket, 98 meters high and with a mass of 2500 tons, is slowly transported by a special tracked vehicle. Because the Crawler-Transporter, which is the largest means of transport in the world: 2700 tons of mass, 8 tracks, 40 meters wide and two diesel engines of 2750 horsepower each. Capable of transporting loads of 8200 tons without problems (curiosity: its consumption is around 296 liters per km).

What it will do

So, the main purpose of Artemis 1 is to actually test almost all the steps that 2, 3 will have to face. Missions that currently involve the presence of humans inside the Orion capsule. This means that the flight plan is complete and includes the departure from the earth’s ground, the abandonment of the Earth’s orbit towards the Moon, the entry and stay in lunar orbit, the abandonment of the lunar orbit and the return to the Land and consequent recovery.

The mission will last a little less than 1 month and in more detail it will consist of these phases: 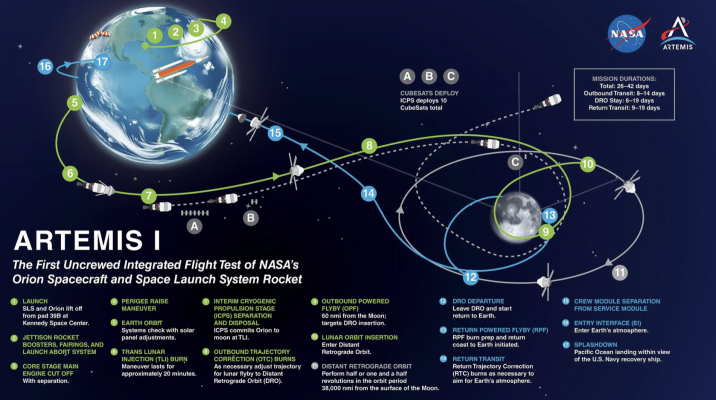 When we go back to the moon the Artemis 1

The question is legitimate: when will man set foot on the moon again with Artemis 1? So, currently the Artemis 2 mission, scheduled for 2023, provides for the presence of a crew but not the moon landing. Instead planned for the Artemis 3 mission scheduled for 2025. And the new merch arrived in time for the event.

The latter also provides for the stay of a handful for two weeks of astronauts. To carry out various specific activities aimed at studying the lunar soil for the construction of a possible human garrison. In short, history has yet to be written and if everything goes according to plan, the next few years will be very rich again for space exploration.